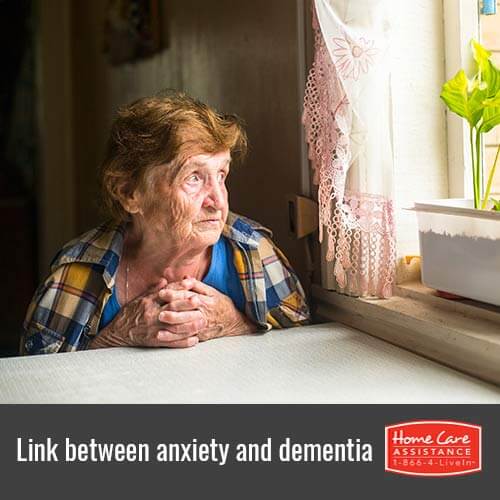 Dementia, which itself isn’t a specific disease, is a common symptom often associated with diseases like Alzheimer’s, Huntington’s, and a form of Parkinson’s, according to Albuquerque senior home care professionals. With more than five million Americans believed to have some form dementia, there is a sense of urgency when it comes to identifying potential risk factors that could lead to early detection and treatment. Researchers in California have added anxiety to the list of potential dementia risk factors.

University of Southern California researchers evaluated data from previous studies involving subjects with anxiety, which included participants who met the criteria for a clinical diagnosis of a psychiatric anxiety disorder. It’s this level of anxiety that could be responsible for detrimental changes within the brain. Signs of severe anxiety may include:

• Lingering feelings of fear or uneasiness
• Difficulty sleeping, which may further compound memory problems
• Shortness of breath and heart palpitations

A long-term Swedish study involving fraternal and identical twins found that participants reporting higher anxiety levels were nearly 50 percent more likely to develop dementia. The anxiety correlation was stronger among fraternal twins than identical twins. For reliable home care, Albuquerque families should get in touch with a caregiver agency and discuss the situation.

The link between stress and dementia may have something to do with sustained higher levels of stress hormones, such as cortisol. One theory is that elevated amounts of these hormones may damage parts of the brain responsible for memory and related cognitive functions.

Some degree of anxiety, as is common with having a job interview or going to the dentist, is perfectly normal and considered healthy. However, researchers reported that people with chronic anxiety are nearly twice as likely to develop dementia than individuals who keep their anxiety in check. The conclusion is that early treatment of persistent anxiety may reduce the risk of developing dementia later in life.

If your aging relative has been diagnosed with dementia and you and your family are unsure what comes next, turn to Home Care Assistance. As a trusted provider of dementia care for seniors in Albuquerque, we offer families and their senior loved ones support every step of the way. Don’t hesitate to reach out to us at 505-798-0800 and speak with a dedicated Care Manager to learn more.